Create an Account - Increase your productivity, customize your experience, and engage in information you care about.

The advent of plastics, resins, foams, and other synthetic materials have made household products affordable and homes more energy efficient. These synthetic materials are stable and often durable under normal conditions, however, when burning in a fire these materials pose an enhanced risk to Firefighters.

Synthetic materials have become more abundant causing fires to burn hotter, faster, and produce significantly more smoke. Volatile chemicals are released in the smoke and can often be toxic or carcinogenic. As a result to smoke exposure, Firefighters have been found to develop and even die from certain types of cancers at alarmingly higher rates than the general population. The risk these hazardous materials pose to Firefighters cannot be completely eliminated, but the risk can be reduced.

Portsmouth Fire, Rescue and Emergency Services (PFRES) has become a regional leader in the defense against cancer by equipping members with a second set of firefighting Personal Protective Equipment (PPE). Firefighting “bunker gear” becomes saturated with toxic compounds while searching for victims and extinguishing fires. Conventionally, Firefighters had to wear contaminated gear during calls for the rest of their 24 hour shift. This needlessly exposed Firefighters to carcinogens until they were able to decontaminate it. Having a second set of PPE allows Firefighters to remain in a state of constant readiness while being able to wash contaminated gear.

In addition, PFRES has invested in state-of-the-art Personal Protective Equipment composed of advanced materials that are more resistant to particulate penetration. Other features improve protection for the most vulnerable areas of Firefighters, and ultimately reduce their total exposure to harmful carcinogens.

Even with advancements in Personal Protective Equipment, Firefighters are often soiled with hazardous combustion products. While still on scene, Portsmouth Firefighters begin removing decontaminates with kits equipped on every fire engine and ladder truck. These decontamination kits are equipped with wipes to remove debris from skin and means to rinse PPE so firefighters can immediately begin the cleaning process.

When Firefighters return to station from a fire scene, they can complete the cleaning process. Firefighting PPE washers and dryers are used to decontaminate the gear and safely placed back into service. Conventional washers and dryers are provided to remove carcinogens trapped in clothing so firefighters do not bring them home and expose their families. Station locker rooms are equipped with showers so firefighters can thoroughly remove contaminates from skin.

In addition, Portsmouth Fire Stations are equipped with Plymovent systems to remove Diesel exhaust ejected by fire engines. The known carcinogen is removed before Firefighters inhale it and before the toxic particulates can accumulate on surfaces and stored gear.

Equally as important as having the right equipment, PFRES has provided resources and training to educate firefighters in methods to reduce their cancer risk in their personal and professional lives. Portsmouth Fire, Rescue, and Emergency Services has taken the first steps to reduce the cancer threat by providing our firefighters with knowledge and vital equipment. Until the scourge of occupational cancer is defeated, PFRES will continue to diligently search for innovations to safeguard our members as they protect our community. 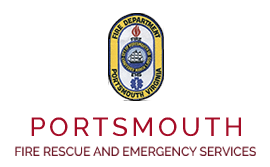